Through our french connection, YLDC Philippines became actively involved in events and activities of the French Embassy in Manila.  This active involvement of YLDC allowed us to receive an invitation, in October 2016, from the French Embassy to submit a proposal for a grant of PHP 150K.

YLDC happily submitted a proposal to buy five to six computer units since the Center only have five units, two of which are not functioning properly.  Having more computers or workstations, would provide bring YLDC close to offering a computer per student.  Unfortunately, YLDC was not chosen to be the recipient of the grant.  This result emboldened the YLDC team be better prepare and participate for next year’s invitation. 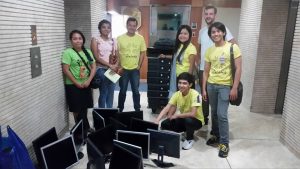 Late November, an email from the French Embassy came informing the team that it is donating 12 units (complete with mouse, UPS, etc.) without the MS Office.   This came us a pleasant surprise; the team felt that this was even better than the grant as we only intended to procure five unit.

We immediately responded via email scheduled a date to pick up the computers.  We rented a van to pick-up our early gift for Christmas.  After the long drive from Fairview to Makati due to the Christmas traffic rush, we arrived at the Embassy tired but happy.  However, happy turned to joy and we became ecstatic when we learned that instead of 12 units, the Embassy is actually donating 16 units!

With grateful hearts, we profusely thanked the Embassy staff and praised God for the blessing.  God really never fails to surprise us.  When Batch 5 starts in February 2017, we know that will be able to train our students better.