“Go beyond our frontiers, create newness, and enlarge our mission especially for the youth and poor with others and with new resources”. This was the main exhortation received at the 4th Fondacio International Congress held in Sibiu, Romania in May 2013.   Since then, Fondacio Malaysia embarked on prayer and discernment to see where we could be involved besides organising sessions and programs for the local parish youth.

The opportunity arose when the headmaster of a local welding academy shared about the needs of students in his centre with us in 2014. With more than 500 students attending the academy he realized the serious implication of acquiring proper skills couple with Christian morals and a steadfast spiritual life which deemed equally essential to building a future young Malaysian workforce. Most hail from the interiors of Sabah and Sarawak while a small number come from Pahang and Kelantan. Coming also from lower income families they have chosen to this welding skill as a means for livelihood and occupation. 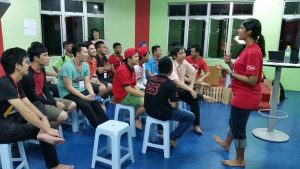 Being predominantly from the Christian faith, these students after their arrival seemed extremely frazzled by what they experienced here in the Klang Valley. Some, due to lack of community support have even fallen out of the faith altogether.

Listening to their concerns and needs, the Fondacio team discerned and then decided to take up this ministry to these students. The collaborative effort began in March 2015, with the invitation of the management and some members of Fondacio Malaysia.

The number of participants who attend the weekly Tuesday session varies. Some days are more encouraging than other. Regardless of that, the working team kept the momentum believing firmly that it is the Spirit who had called and who is guiding. Despite all these challenges, these team members remained steadfast and care for these students unconditionally. Indeed it is faithfulness that has brought the team thus far. Today, there are around 40 – 50 students attending regularly the weekly Tuesday gathering. 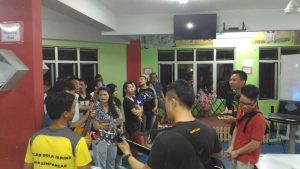 Every Tuesday – Rayner, Heldy and Jerome to journey with these students – Year 2016

Besides basic faith and self-discovery components, the team has also incorporated Catholic teachings as an approach to relate and to deepen their relationships with each other. Other topics like leadership proved be complement the overall program.

Fondacio Malaysia is also collaborating with youths from St. Francis of Assisi, Cheras, and St. Francis Xavier, Petaling Jaya. This has allowed the team to reach out more effectively to students of MWA.

Fruits are also seen on some of those who had journeyed regularly with Fondacio in year 2015 period have matured and have taken up responsibilities to help their juniors who are still studying. 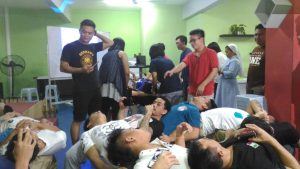 Feedback obtained through a survey conducted with students from 2015 indicated that they indeed benefited from the sessions. They reckoned that it allowed them to foster friendships as well as build their confidence, allowing them to recognize themselves as young leaders. Unanimously, they felt responsible to now share the faith with their juniors and ensure that they too discovered themselves creatively through the weekly sessions by Fondacio.

Calling for Workers at the Vineyard

In our approach of ministering to the students, Fondacio endeavours to build a core team working with the MWA students (past & present). Our objectives are as follows:

Thus, we welcome anyone who wishes to journey with these Sabahan and Sarawakian. Be free to call on us!!